Did you feel it?

Last week, the earth shifted on its axis... did you feel it?

I am the Queen of Procrastination, unparalleled in every way.  I have quilts that I started when  my sons were young, and by young, I mean grade school, and by grade school, I mean younger than middle school.  I'm talking a LONG time ago.
One of these quilts I made for Stephen, then came to realize that Stephen doesn't care about airplanes and I should make him a quilt that reflects him; then, before I got the quilt finished (more than TEN years later), I find out Stephen loves this quilt, and that it does reflect him; it's perfect for him and his wife who both like the moon and planet fabric that I was obsessing about low those many years ago... by now it's 13-15.
Shameful.
But then again, it's never too late to finish those quilts.  They keep very well.  I did a good job and they are beautiful, and pleasant to work on.
Wow!  I'm glad I finally remembered that!.. Did I mention that they are 13-15 years old?
I put the Ricky Tims piped binding with mitered corners on Stephen's airplane quilt; probably 13-15 years old.  Now, at long last, it is finished (except for the label and the hanging sleeve, which while certainly as important as gravy on the potatoes, is, in fact, gravy on the potatoes... it is legal to serve plain potatoes).
Praise Jesus.  That the quilt is bound, not plain potatoes.  Praise Jesus for gravy.
Stephen is very excited to hang it in his house.  As a matter of fact, I said to myself that I could NOT go back to Virginia Beach without that quilt, finished.  The impetus was my parents coming out for Mother's Day.  The quilt was on the floor in the spare bedroom and they were coming.  It had to come up.  I didn't want to have to put it back down, so I decided I had to advance it to the next stage right then.  So I did.  I cut off the edges, got out the Ricky Tims dvd. watched it again and cued it up, filled the bobbins, pressed and trimmed the binding, which I had already applied piping to two years ago.  I am NOT hard to keep up with!
So now I need to take a good picture of it before I send it to it's new home.  I have a friend who takes great pictures of her quilts for her blog.  I'll see if she'll help me take a great picture of this one.   Then you can see it, too!
Next topic: Selvage quilts!  How much fun are they?  I decided to clear a space around my sewing machine and had a stack of dryer sheets (used), and a stack of Kaffe Fassett selvages.  So I killed two birds with one stone.  Although I would never kill a bird with a stone unless I was starving.  I now have about 15 6x9" blocks made from selvages sewn onto dryer sheets!  I'll do pictures later... I have to do this in baby steps.
Posted by katquilter at Saturday, May 15, 2010 1 comment:

Not Two Days In a Row!

Somebody should have told me that it hurts the eyes to look at my blog!  Look, I've changed it... I still need to learn how to customize and move things around... but at least it won't give you a headache.

I know I sort of promised that there might be big changes on the blog. but we had SUCH a great visit with the girls!  We were a bit distracted by the overpowering preciousness of the little one. I'll work on it from here.  Baby steps, right?
Posted by katquilter at Friday, March 12, 2010 No comments:

I just got back from a great two-week visit with my gorgeous grandbaby.  I know what you are thinking; EVERYBODY thinks their grandbaby is gorgeous; and I think that is GREAT!  But my grandbaby really IS gorgeous!

The Gramma has been stuck creatively for a couple of years now, but was recently given new creative life when presented with a little less than a yard of Kaffe Fassett fabric.  It's such a particularly beautiful piece of fabric; it truly went straight to the marrow of my bones and lifted me up in a way that I hadn't been in YEARS!  Here is a pillowcase for my buckwheat hull pillow that I sleep on every night, made from this same fabric: 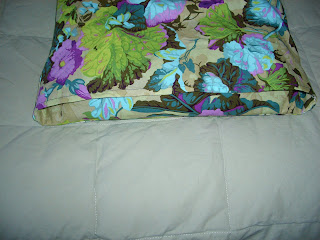 Well, that's not the picture I thought I had, but I want to show the end of the pillowcase anyway.  I got this pattern from this blog... one of my very favorite blogs:

While you're there, check out the rest of her blog.... amazing!  Well named!  I LOVE color, and the idea of EXUBERANT color just makes me so happy!

Here's a better picture of the fabric: 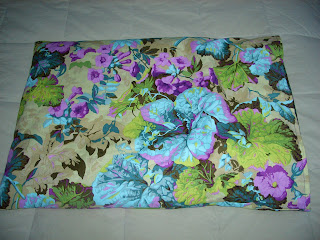 Here is the next thing I made, using this "less than a yard of fabric", given to me by a friend: 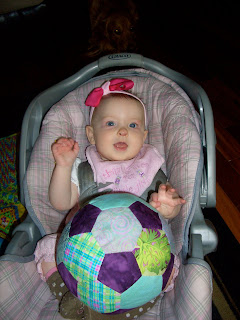 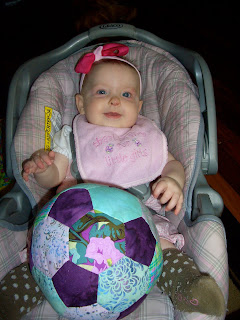 Darn!  Again I picked not the perfect example!  In this picture, you see two adjacent pieces that are alike.  NOT what I was trying to show; but since we're here... please notice that it was too much work to take apart and resew once I realized there would be two adjacent pieces from the same fabric.  I am cut from a more relaxed bolt of fabric, I guess.  I let the ball be what it was, and I'm letting the picture stay as it is. A very wise and wonderful quilting friend once told me not to bother redoing things, but to keep marching forward, improving as you go, leaving a history of your progress.  That's my story and I'm sticking to it!

The entire soccer ball is hand stitched using the  English paper piecing method;  the only saving grace for all those annoying card stock postcard things stuck in magazines to sell you subscriptions.  I enjoy making grandmother's flower garden parts, nothing near a quilt, mind you... maybe in a thousand years. OR maybe this adorable grandchild will want the finish THE GRAMMA'S quilts.  Wouldn't THAT be great? 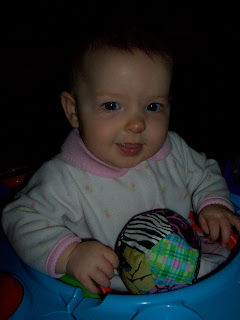 When I got the soccer ball all finished and gave it to her, I could see that it's a little big for her right now. That's when I made the smaller ball, made just from the pentagons that I used in the soccer ball.  I used this book for both balls:

I owe a big thanks to my friend, Kate, who graciously gave me this fabric, giving my creative soul a huge boost.... Thanks, Kate!
Posted by katquilter at Thursday, March 11, 2010 No comments:

going to see the grandbaby

Next week I go see my beautiful granddaughter.  My DIL is a much better blogger than I am and suggests that we amp up the action on my blog.  I'm just warning you now, so you can be prepared.
Posted by katquilter at Saturday, February 20, 2010 1 comment: 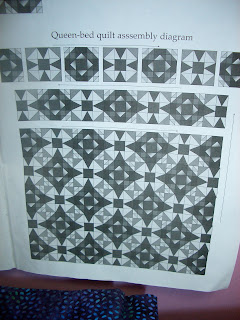 Here is a black and white picture of the pattern.  Here is a link to the actual pattern, in glorious color. 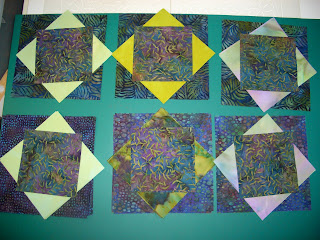 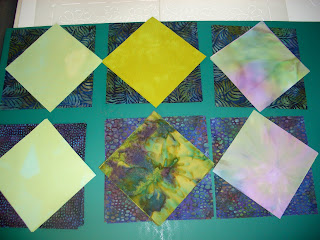 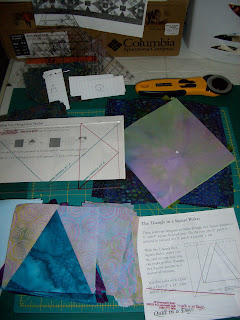 The next picture shows my fabric and tools for the flying geese and the tri-squares.  I'm going to call them "tri-squares" instead of "Peaky and Spike" or "triangle in a square", just to save time.  In my heart, they will always be "Peaky and Spike", in honor or Doreen Speckman. 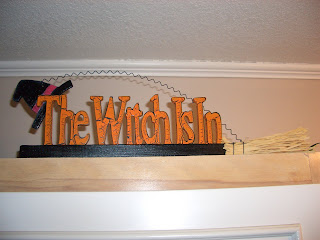 Well, it's that time of the year: my FAVORITE time of the year..... HALLOWEEN!  I have been arranging and rearranging my witches.  Perhaps I will share some of my favorites with you in the next couple of weeks. 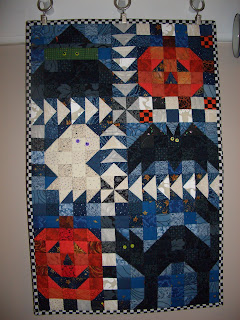 And here is my latest COMPLETED project: a cute, little Halloween quilt that I started years ago.  Actually, years ago I made one and gave it to my sister.  Then I really wanted one to keep, so I decided to make another one.  Since I had cut SO MANY of the one-and-a-half inch squares from which this is made, I already the the fabric ready to go.  This time, though, I made an improvement in my technique.  I started with the gridded, fusible interfacing, attached the little squares to the interfacing, thus making this version of my quilt so much easier (not to be confused with "easy"), and it hangs so much straighter!  It seemed like a logical choice to bind it with the black and white check, which I found at WalMart, (not my favorite place to shop but Oh! So Convenient when  they have what you need).  Now get this:  the selvage for the plain black and white checkerboard fabric, says "License is required for any use beyond individual consumption".  Really?  You can copyright plain old black and white checks?

I've got to learn how to put words with my pictures!  Here is a picture my son took of his wife (on his iPhone, God Bless Steve Jobs!) with the nursing cover I made for her.... She likes it!

Here is the link: http://www.blisstree.com/breastfeeding123/free-pattern-to-sew-your-own-nursing-cover/

Great instructions!  I put a pocket on it; somewhere in the comments this was recommended.  It's for a tissue, or the pacifier, or whatever....
Posted by katquilter at Sunday, September 27, 2009 1 comment: